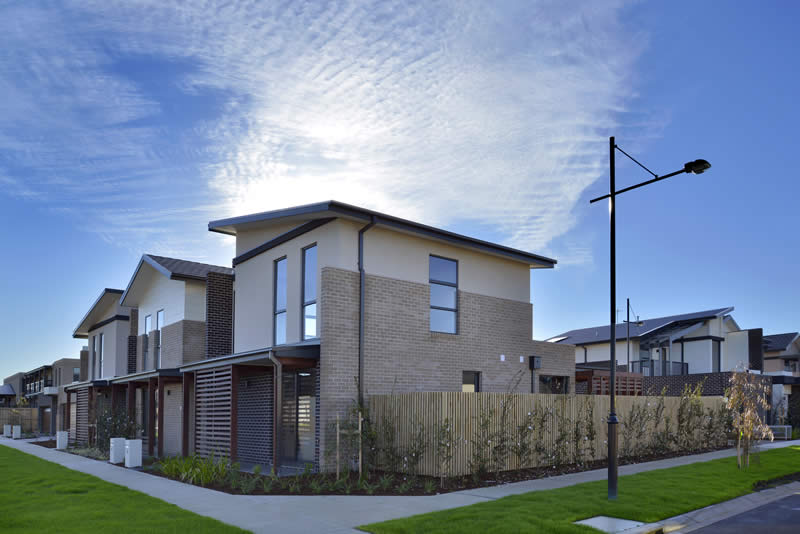 Developing the new trend: How townhouses are evolving across Melbourne

In the 80s and 90s townhouses were a fairly average, straightforward style of accommodation. They were usually bigger than apartments, but smaller than houses, they were often seen as a stepping stone before acquiring a bigger or more luxurious dwelling. But things have changed dramatically.

Now, townhouses, or townhomes as some builders prefer to call them, are no longer playing second fiddle to the quarter acre block, and in fact many buyers prefer a townhouse to a free-standing home.

According to national developer Cedar Woods chief operating officer, Patrick Archer, “If you are a professional couple with a busy schedule you might not want a large garden. My own weekends are very busy with the kids sports and the like, and I don’t want to be spending time maintaining and gardening. It’s exactly why townhomes are so popular.”

Data compiled by property specialists PRDnationwide shows townhouse development approvals have grown in metropolitan Melbourne by an average of 126.3% a year since 2011.

PRDnationwide data shows Box Hill and Glen Waverley are among the strongest performers, gaining 134 and 75 respective development approvals for individual townhouses in the first 4 months of 2018.

Pascoe Vale was another hotspot with 265 individual townhouse approvals over that same 4 month period, already doubling the tally of the whole of 2017.

So what’s driving this love affair for townhouses?

According to Canny’s Greg Davy “Apartments don’t have land. Townhouse buyers like the idea of buying a piece of land rather than just space in the sky. The mentality of land ownership in this country is a real factor, and people know that also presents better resale value.”

Mr. Davy says “Townhouses can be fairly straightforward, or also very luxurious depending on what the client wants or needs. Usually, people require a minimum of 3 bedrooms, 2 bathrooms and a second living space.”

“People often want marble kitchen bench tops and stone in their ensuites. The finishes are often as fine as you expect in a custom home. Some want basements, or wine cellars, or lifts up to their third floor.”

Patrick Archer of Cedar Woods says townhouses cater to a growing demand for low-maintenance but with the luxuries of a much larger home.

According to Mr. Archer, “They are built with incredible energy efficiency with most having 6.5 star rating. We are also making living spaces more functional – it’s not uncommon to have a butler pantry in a townhouse these days. Once people were satisfied with a cupboard-concealed euro laundry, but many want a full walk in laundry now in their townhome.”

Cedar Woods developments like Jackson Green at Clayton South and St.A at St Albans have a large townhouse component, many selling out within several days. The Jackson Green Type 9A townhouses, with 3 bedrooms 2.5 bathrooms a single garages were available from $865,000 in the Harvest Release.

The St.A Lotus townhouses with 3 bedrooms, 2.5 bathrooms, plus single garage were available from $626,000 in the Padley Release. Both communities being reasonably close to the city is also a key factor. Cedar Woods tends to build townhouses in infill areas with established communities and infrastructure.

In the past growth corridors were the preserve of bigger homes but as land becomes more expensive, even on the outer fringe, townhouse options are appearing in masterplanned communities also.

“Land value has climbed by 20% in some growth areas in just the last 12 months. If you are buying land at $350,000 you are building an expensive home. Townhouses are a much more affordable choice.”